Picking up where I left off in my last post—thinking of the financialization (and thus the enclosure) of the future—the jump in Enbridge stocks as the government of Canada approves construction of the Northern gateway Pipeline, spilling future fuel on rivers we’ve yet to wade, into harbours we’ve yet to swim across—as well as the link between climate change and such future-oriented market speculation—some notes (and I guess “poetic” musings) on “scenario planning.” 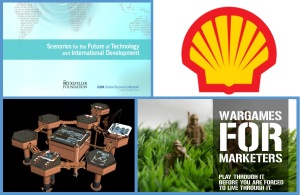 Shell Oil has been using scenario planning “to explore the future since the early 1970s.” Shell’s “futurists” (yes, Shell employs “futurists”) develop these “what if” scenarios of “plausible futures” in order to make their business plans—ideologically palatable. Interestingly, these plans have increasingly come to accept climate change as a “plausible” future factor. Apparently, a future without oil, a future without Shell, is not—plausible. Futurists are investors too, “futures” fictions traded on markets. Time is money.

“What if” the future was not driven by the market—is not a scenario that can be considered at all.

There are only two scenarios, when it comes down to it, in the final solution of Shell’s shell game: “Scramble” and “Blueprint.” They basically map conceptually as free-for-all fight for the remaining planetary resources (that’s the “scramble”—like some kid throwing candy in the schoolyard), or planned and careful diversification of a range of fossil fuel and some limited alternative energy production as a response to civil society pressures to curb carbon emissions. We can do this the easy way, or the hard way—the choice is yours

is of course no choice at all.

I’ve long been fascinated by Stanley Kubrick’s 1964 film Dr. Strangelove or: How I learned to Stop Worrying and Love the Bomb. Slim Pickens rodeo riding an atomic bomb down over a Soviet base. The idea of the “doomsday machine”—something once triggered we cannot turn off no matter how brainless we set our destruction in motion—all is lost until we meet again (I don’t know where, I don’t know when). Then all of us singing and dancing on our own graves—and those of other species less invested in our game of mutually assured destruction. Originally, the film was supposed to end with a pie fight in the US War Room.

Near the end of the film the barely-reformed Nazi Dr. Strangelove (played brilliantly by Peter Sellers) proposes a “scenario” in which a select and eugenically-chosen few humans are preserved in deep mine shafts until the nuclear winter is over (in about 100 years, give or take, the good doctor estimates). Just in case the Soviets have the same idea, and sneak a bomb into their mineshaft, General Turgidson (played by George C. Scott) recommends the remnants of the American portion of the human race (the most powerful men and most beautiful women, of course) take a bomb or two beneath ground with them—to avoid a potential future “mine shaft gap.”

What was once parody has become allegory. Oil is now the bomb. Scenarios like Shell’s sneak carbon bombs into the mineshafts of futurity—just in case no one blinks on our way to three, four, of five degrees centigrade uptick in the century ahead.

Scenario (2020): The Kinder Morgan Pipeline, having been “twinned,” is now carrying almost 900,000 barrels of oil per day as it sneaks through suburban Vancouver, filling 35 supertankers each month in the harbour of “the greenest city in the world.” One warm May, let’s say, there is a line rupture near the Pitt River Bridge, spilling massively into the Fraser River just east of the city. Oil quickly coats the surface of the river throughout its delta, winding through farms and the city [correction: diluted bitumen, upon coming into contact with air and water, separates into the rapidly evaporating toxins of its condensate and the heavier bitumen, which sinks to the river bed]. In this scenario, “oil that reaches the mouth of the river is discharged into the Straight of Georgia [comment: Salish Sea] with considerable momentum…it is likely that this oil will affect shorelines on the opposite side of the straight” [20 kilometers away] (Kinder Morgan blithely projects in its National Energy Board Application).

Response: Quote. “Pipeline spills can have both positive and negative effects on local and regional economies, both in the short- and long-term. … Spill response and clean-up creates business and employment opportunities for affected communities, regions, and clean-up service providers.” End quote. (Kinder Morgan National Energy Board Application)

Response: militarization and expansion of law enforcement; privatization and expansion of for-profit prison system (despite generally declining crime rates); legislative changes that largely criminalize dissent (including the wearing of masks, the photographing and filming of law enforcement personnel, the classification of most public gatherings as “unlawful,” and the categorization of certain speech acts as “terrorism”); an expansive and even pervasive web of on-line and urban/spatial surveillance to both dissuade and/or track/capture “trouble makers.” 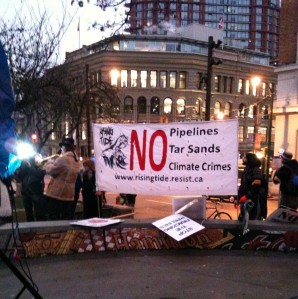 Scenario planning, despite the utopian veneer, is about maintaining state and corporate advantage into the future. It is about future increase and future stability for those to whose advantage more and more of the same unfolds. “Visualize how the future could unfold and create a new and different business ‘landscape.’” But the landscapes are all still business landscapes and no other landscapes exist or could plausibly come to be.

The future is not a scenario it’s what we will one day become, breathing or not, drinking clean water or not, dwelling in liveable communities—or not. We walk backwards with difficulty into an access no one sees no one possesses no one’s home. Go free but go carefully.